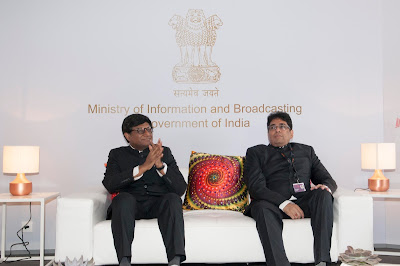 The 70th Cannes Film Festival, May 17 - 28, 2017 is the most prestigious event on the international film calendar and attracts 12,000 participants from the global film fraternity, including at least 3,200 producers, 1200 sellers, 1750 buyers and 800 festival programmers, who use this unique platform to discover films, filmmakers and locations and seek collaborations with the various stakeholders from the industry. The Ministry of Information and Broadcasting, Government of India, like the previous years, organized the India Pavilion at the Cannes Film Festival. On May 18, 2017 the India Pavilion was inaugurated by His Excellency the Ambassador of India to France, Dr Mohan Kumar and Mr Ashok Parmar, the Joint Secretary (Films) of the Ministry of Information and Broadcasting. During the inaugural session, the Brochure and Regulations for the Foreign Section of the International Film Festival of India 2017, was unveiled. On this occasion H.E. Dr Mohan Kumar said, “The fundamental change in the cinematographic landscape of India due to technology, budget and the audience of 1.2 billion is remarkable. The dramatic emergence of Indian cinema especially with the release of Bahubali and now Sanghamitra will prove to be game changers in this regard. In addition films like Dangal have changed the perception of India. The Franco Indian film The Hundred Foot Journey offers a way forward in terms of cooperation between India and other countries for cinematic production.” Speaking on the various initiatives that the Government, especially the Ministry of I&B, has taken to grow the film industry in India, the Joint Secretary (Films) Mr Ashok Parmar said, “The Ministry’s Film Facilitation Office, which is housed in the National Film Development Corporation and the Film (F) Visa are important steps to successfully promote India as a filming destination and at the same time explore partnerships to bring around more co-productions with the global film fraternity. Our premier film festival the International Film Festival of India, which is in its 48th edition and held in Goa, has helped in contributing to the understanding and appreciation of film cultures of different nations through the diversity displayed within its film selection. Each year IFFI brings with it the latest critically acclaimed films, brilliant master classes and workshops by renowned film personalities, and visits from several celebrities in the film industry, both national and international. The Film Bazaar by the National Film Development Corporation, which is held alongside the International Film Festival of India, is South Asia’s largest film market facilitating co-productions at a global scale. An upcoming National Centre of Excellence in Animation, Visual Effects and Comics, which is being set up in Mumbai and a new Film and Television Institute in the North Eastern State of Arunachal Pradesh, are both in synergy with the Government’s overall endeavor to enhance the skill of the film sector and add qualified resources to the Industry. The Ministry has initiated work on the ambitious National Film Heritage Mission through the National Film Archives based in Pune and is gearing up for the inauguration of the National Museum of Indian Cinema in Mumbai under the aegis of Film Division, as a part of its effort to preserve the century old cinematic heritage of the country”. He then went on to express his optimism at such efforts bearing positive results for the film fraternity and for the Country as a whole. About the India Pavilion The India Pavilion is organized by the National Film Development Corporation Ltd (NFDC) on behalf of the Ministry of Information & Broadcasting. The India Pavilion is set-up by the NFDC at the Cannes Film Festival. The Pavilion is a fully equipped and functional business center during this period and provides Indian delegates with an opportunity to meet and conduct business with leading members of the international film fraternity. The Pavilion shall host knowledge sessions with various filmmakers and also facilitates the publicity of films produced by Indian filmmakers. The Corporation has published an India Guide with details of Indian professionals registered with the Cannes Film Festival & Market. About the Ministry of Information and Broadcasting www.mib.nic.in The Ministry of Information and Broadcasting, through mass communication media—radio, television, films, press and print publications, advertising and traditional modes of communication such as dance and drama—plays an effective role in helping people have access to free flow of information. It is the apex body for formulation and administration of rules, regulations and laws for the same. It also caters to the dissemination of knowledge and entertainment to all sections of the society, striking a careful balance between public interest and commercial needs, in its delivery of services. It is responsible for international co-operation in the fields of mass media, films and broadcasting, and interacts with its foreign counterparts on behalf of the Government of India.
India Pavilion 2017 | Cannes International Film Festival #JohnsonThomas