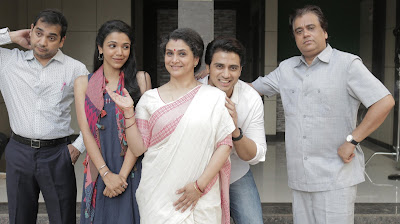 Mumbai, 9th May, 2017 – This Mother’s day, Terribly Tiny Talkies is coming up with their next short Jai Mata Di starring Shiv Pandit and real life mother-daughter Supriya Pilgaokar and Shriya Pilgaokar together onscreen as mother and daughter for the first time. Directed by Navjot Gulati (who shot to fame with his YouTube series Best Girlfriend) and produced by Terribly Tiny Talkies, 'Jai Mata Di' will go live on the 13th May, 2017 at 9 p.m tentatively. This humour filled short drama is about a couple, Suraj and Ananya, who are shifting from Bangalore to Mumbai and want to live-in together to kick off a new phase in their relationship. They go house-hunting but can't just find a house that Ananya likes until they see an apartment which has her heart set on but there is a hitch, the housing society does not allow unmarried couples. Their broker Datta Verma comes to their rescue, he suggests that they pose as brother-sister and call Ananya's mother's to come for the society meeting assuring them that they are indeed siblings. Chintan Ruparel, Co-founder & Chief Creative Officer, and Sharanya Rajgopal, Chief Writer & Creative Producer, Terribly Tiny Talkies says "Mumbai is a funny city. Call it a melting pot, the glamour capital, or simply the most open and safe place to be around. But when it comes to two people living under the same roof without a marriage certificate, it’s not religion, caste, or even the parents that’s the biggest hurdle. It’s a species that dictates the law of the land without really owning it. The Society Secretary. But as they say, there’s nothing mom can’t solve. With that belief on the one hand, and a funny bone in the other, this Mother’s Day, we say Jai Mata Di." Talking about the emotions felt on Mother's Day, writer-director Navjot Gulati says “Ever since the digital boom in the country we have lots of content being made centred around specific days. Every mother's day we see some heart wrenching story being told and people sharing the content with a heavy heart. This mother's day however they will share the content with a smile on their faces as this is quirky story and not a heart wrenching one." Delighted on sharing the screen for the very first time with her daughter, Supriya Pilgaokar says "Shriya and I have shared screen space before but this is the first time that we actually performed together. She is a natural and I am very proud of how she is carving her own way. In this short film 'Jai Mata Di', we share a unique relationship which people are going to love. " Shriya Pilgaokar, who made her debut opposite Shahrukh Khan in Fan last year says "This short film with Terribly Tiny Talkies is extremely special to me because mom and I worked together for the first time. And it's even more special because we shot this film on my birthday ! She is a super women in every aspect and a brilliant actress . I look upto her grace on screen and it was too much fun to work with her." Chintan Ruparel, Co-founder & Chief Creative Officer (TTT), and Sharanya Rajgopal, Chief Writer & Creative Producer, (TTT) and the star cast of Jai Mata Di, is available for interactions. Let us know if you are interested in interviewing them. About Terribly Tiny Talkies  Terribly Tiny Talkies is a storytelling collective which brings together distinctive and talented filmmakers from across the country to craft thematic short films. Each talkie is under ten minutes, and filmed around either a central keyword or idea. TTT endures to save the fading art of the narrative, one frame at a time. Terribly Tiny Talkies is part of Terribly Tiny Tales - India's largest and most celebrated social storytelling platform. Till date, Terribly Tiny Talkies has 17 short films to its name. TTT had 5 of its films shortlisted at Jio Filmfare Awards,2017 in their short film category and has also won awards at different national and International Festivals last year.
Jai Mata Di brings in the humour this Mother’s Day with real life mother-daughter Supriya Pilgaokar-Shriya Pilgaokar and Shiv Pandit #JohnsonThomas Terribly Tiny Talkies’ next short