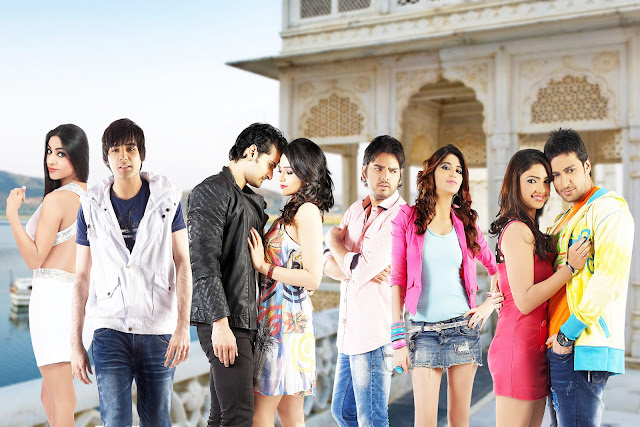 The romcom ‘Love Ke Funday’, a film on today’s youth has been produced by FRV Big Business Entertainment Private Limited by Faaiz Anwar and Prem Prakash Gupta. Written and directed by Indervesh Yogee, the film with music by Prakash Prabhakar & Farzan Faaiz, is slated for release in July this year.

The film revolves around four heroes and four heroines. One is a married couple while another pair is in a live in relationship. There are two bachelors who keep changing their girl friends, like most of the youngsters do today. The youth oriented film has dialogues with humorous punches like “Why do jeans for girls have chain in them? What is the use?”

Faaiz Anwar is a renowned romantic poet and lyricist and his romantic songs are legion, like in Dil Hai ke Maanta Nahin, Saajan, Hello Brothers, Jab We Met and Dabbang (Tere Mast Mast Do Nain) and Rowdy Rathod (Chikni Kamar). Prem Prakash Gupta who had earlier produced Super Model and the Punjabi film Munde Kamaal De .According to them today’s youngsters think differently and have a different approach towards life and hence given a break to a new director.

Indervesh hails from Haryana. It is Indervesh’s debut as a director after having assisted several big directors in the past. Indervesh Yogee says, “It is a film on today’s youth and hence college boy and girl will be able to identify themselves with each and every character on the screen, especially as it is a film about them and has been presented with a sense of inherent humour”.

Manjunath N. and Manohar Iyer are the co-producers of the film Love ke Funday. The associate producers are Aashni Krishna, Sundeep K Goyal and Jasbir Singh while Shree Shankar is the cinematographer of the film. Meraj Ali is the Editor and Rahul Vichare is the art director. Aslam Keyi has done the background music while Sujit Kumar is the choreographer.Buniyad Ahmed is the Executive Producer while Atit Jaidev is the Creative Director who has also handled post production. Naushad Shaikh and Abhishek Sharma are the production managers of the film.The film stars Shaleen Bhanot, Rishank Tiwari, Rahul Suri, Harshvardhan Joshi, Ritika Gulati, Samiksha Bhatnagar, Sufi Gulati, Pooja Bannerjee and Pramod Moutho.

Relive your memorable moments from the golden period of your campus days in Love Ke Funday which is slated for release In July2016.
The Romcom Love Ke Funday on Today’s Youth Set For July Release #JohnsonThomas